IoT is a revolutionary technology that dates back to the 1990s. It is a model that connects everyday things in a network of all kinds. The interconnection of the elements in your home or office connects seamlessly to the Internet and communicates with each other for increased efficiency, cost savings, and simplified management. IoT is not only useful for home users, but it offers huge benefits, such as high efficiency, to large organizations.

Before getting into the details of IoT architecture , lets take a look at some of the devices in IoT domain which are already in market to grab an idea of IoT applications.

A Quick Overview of IoT Devices:

Below is an overview of most remarkable IoT devices:

1. Belkin WeMo Switch & Motion:  This is a Belkin home automation product that lets you control your home virtually from anywhere in the world. Just plug the device into Belkin switch and enjoy remote control and monitoring of the plugged in device.

2. SmartThings –  Knowing and controlling your home: Just like Belkin switch, it allows us to convert any device into a smart device. At $ 99, this is a smart hub compatible with a large number of devices. It also comes without monthly fees.

3. iSmartAlarm: This is a complete smart security kit for your home. This is a very intriguing, intelligent home security device that anyone can use.

6. August Smart Lock: This tiny smart lock can be opened only using your smartphone. It allows you to manage multiple users with the access control you specify. But this can be a pretty expensive security device.

What do we mean by an IoT Architecture?

By IoT architecture, we mean the technologies involved including protocols, standards and approaches necessary to build a complete working IoT system. Think of an Apartment and a Bungalow. What makes us call that they are different in their architecture? if we take certain things out from a beautifully built Bungalow, we will alter the architecture and it will certainly not be considered a bungalow. 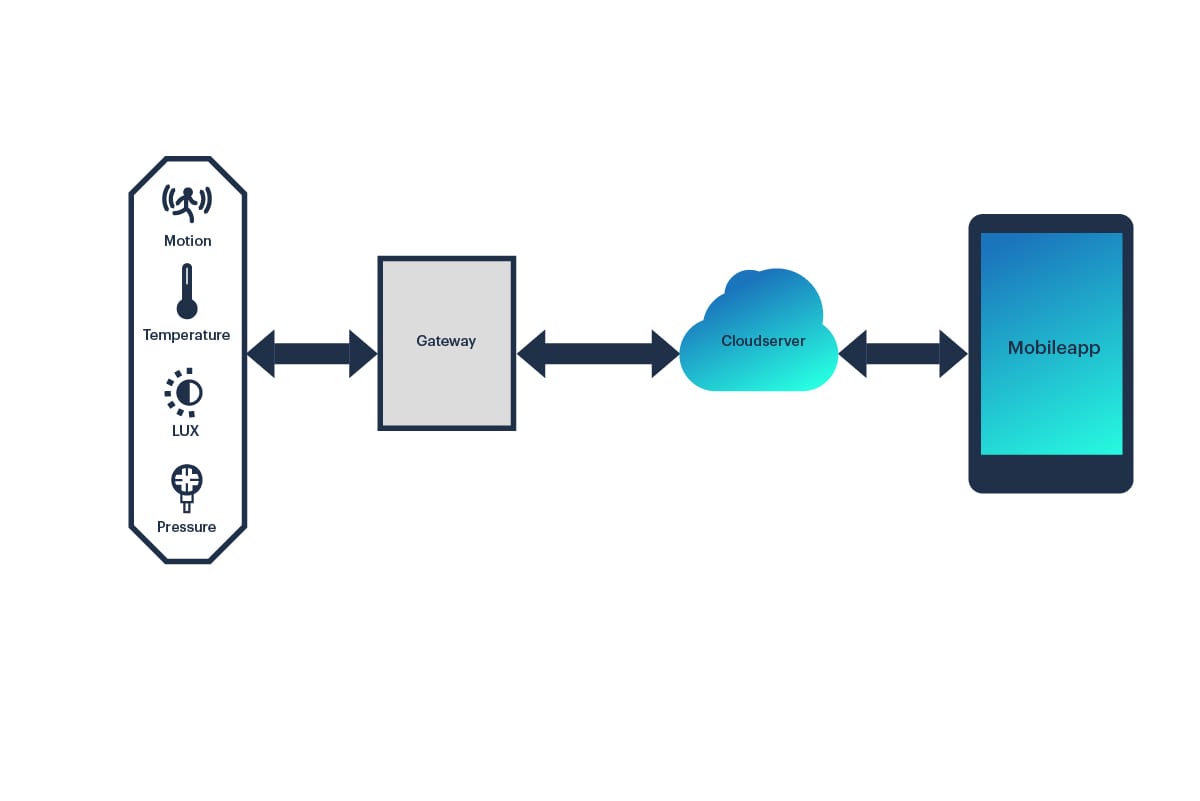 Sensors are the frontend of IoT devices. As the name suggests, they perform the function of ‘sensing the environment’. Their main task is to extract the necessary real-time data from the surroundings and then transmit that to processing systems – Microcontrollers.

Usually, Sensors are connected directly to microcontrollers through a wired connection. In a complete IoT product like the ones described above, both microcontrollers and sensors are mounted on a single printed electric board and packed together to form a product.

Sensors must be able to be uniquely found from their assigned network addresses as they are considered to be a basic element in the large network of other devices.

In computer and other electrical systems, processors play a vital role in data processing. The main task of the processors – which we call microcontrollers in IoT due to their small size – is to process the real-time data collected by sensors and either process it locally or transmit to the cloud – a server on the internet – via an IoT Gateway for in-depth analysis and processing.

Microcontrollers are easily controllable by end-user applications, and they also perform the most important task of securing data. They perform encryption and decryption of data.

Gateways facilitate data communication. An IoT gateway is something that sits between cloud services and microcontrollers to enable the transfer of data and information between the two.

Main task of gateways is to take processed data from the microcontroller and transfer it to an appropriate network or IoT platform by utilizing various communication protocols such as WLAN, xBee, 3G/4G, and WiMAX, etc. for further analysis in order to generate meaningful insights and analytics. This IoT platform is a server in the cloud and may use machine learning and AI technologies to generate advanced analytics from collected IoT data.

Applications are considered as endpoints of IoT systems. Applications provide an interface for users to interact with data. These applications can be web based or mobile applications serving one or both of the following purposes.

1. Displaying sensors data collected by microcontroller
2. grab the processed information from cloud IoT platform and display to user in a meaningful way.

Applications are user-controllable and also known as delivery points of particular services. They can also be used to control particular IoT devices or send instructions to microcontrollers.

SmartThings provides a mobile app to monitor and control all the connected things at home.

Now that you have grabbed an idea of all the Four building blocks of IoT, let’s move further and understand how all the blocks combine to form a big picture of an IoT system.

How do IoT Systems work?

If we summarize the elements of IoT architecture, we can say that the real-time data collected by sensors are transferred to the integrated processors known as Microcontrollers. These microcontrollers transform raw data into meaningful information and then transfer it again to remote cloud applications – also known as an IoT platform – through the connectivity of gateway device for further processing and to generate analytics. The processed information is transferred to applications for users to display and interact.

Keeping in view the Building blocks, Internet of Things system is based on three fundamental layers.

Physical layer consist of gateways, sensors and actuators. In IoT systems, this layer serve the purpose of collecting raw data by using sensors ,to send gathered data from sensors to higher layers and to process control signals for actuators to function accordingly.

Think of a Temperature sensor and an actuator –  We have already defined sensors above , actuators can be defined as something that cause a measurable change in environment such as an LED, a bulb or a Fan – sensor is continuously reading temperature and feeding it to microcontroller. Microcontroller decides to turn on the LED as a caution if temperature exceeds a certain limit.  Both components – sensors and actuators- interact with the physical world and thus they form physical layer of IoT Systems. Physical layer is also known as perception layer.

This layer is responsible for managing sessions, security and error control. Some researchers also state this layer as Resource layer and divides it further into access layer, internet layer and service management layer for the sake of simplicity.

Application layer is the top most layer of the IoT architecture and have a close resemblance to the application layer of OSI model in computer networks. This is where information is utilized for useful purposes to form IoT use cases for example, smart home, smart grid and enterprise IoT solutions.

As the protocols and standards gaining maturity, IoT is going to cause a major impact in each sector. However, Challenges are still there in development of a complete and adoptable IoT framework in order to utilize the full potential of internet of things.

Benefits of IoT (Internet of things) based solutions for Smart Transportation

IoT in agriculture: Is Smart Farming the future?

What can we Expect from IoT based Smart Cities?